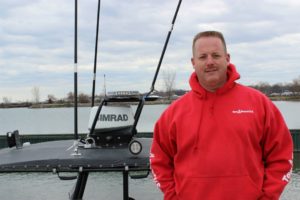 Employed with Towboat US, Lake St. Clair since 2011.

Boating has been a major part of my life since I was born. As a kid growing up in South Kingstown, RI, there is not much else to do but be around sailboats, motorboats and marinas. In my youth, I spent most of my summers on my dad’s 30-foot sailboat sailing on the Atlantic. As I grew older, I was introduced to racing in 420’s and 470’s. I won my first race in a 470 when I was ten years old.

In my early teen years, my family moved to the mid-west where I found a new boating arena in the Great Lakes. I participated in most local Detroit and Grosse Pointe Yacht club races that eventually led up to crewing for numerous Port Huron and Chicago Mac races.

After a military stint with the U.S. Army working on Helicopters, I came back to the Midwest and resumed boating on Lake St. Clair and purchased my first boat with my wife. We are now on our second boat and continue to own and operate a 28-foot Sea Ray on Lake St. Clair today.

With all the boating and sailing opportunities available in Michigan, it was only logical to pursue my Captain’s License. I had originally intended to use it for the delivery of sailboats around the Great Lakes for the various big boat races, but then I discovered TowBoat US Lake St. Clair based in Harrison Township, MI.

I enjoy the opportunity to assist boater’s in need on Lake St. Clair via one of the best equipped and maintained Tow Boat U.S. Fleets in the country.